Stationed at Camp Lejeune 1953-1987? You Might Have Legal Rights to Pursue Compensation.

For the thousands of U.S. veterans and their family members who lived on base at the United States Marine Corps Base Camp Lejeune in North Carolina between 1953 and 1987, they might have been exposed to serious health risks. Marine Corps service members and their loved ones who lived on base drank water containing toxins and also used it to bathe, clean, and cook. Since that time, many exposed veterans and their family members have developed serious health problems believed to be related to their time at Camp Lejuene, including several forms of cancer. Even though the service members’ cancer and other health conditions have been linked to the contaminated water at Camp Lejeune between 1953 and 1987, many have had their claims for benefits denied by the U.S. Veterans Administration. Just like military personnel who have sought compensation for hearing loss due to 3M earplugs, military personnel who have been diagnosed with cancer after serving at Camp Lejeune between 1953 and 1987 may be able to seek compensation. 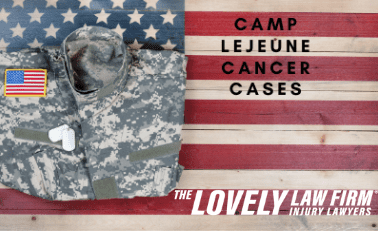 In 1982, routine testing of the water at Camp Lejuene found that there were high concentrations of several volatile organic compounds (VOCs), including benzene, Trans-1,2-dichloroethylene (DCE), trichloroethylene (TCE), vinyl chloride, and perchloroethylene (PCE). Each of these substances is a known carcinogen and is toxic to humans. The water was found to contain as much as 300 times more than the acceptable levels.

The VOCs found at Camp Lejuene are toxic chemicals that are commonly used as ingredients in degreasers and solvents. The VOCs were traced to a nearby drycleaning company that used these chemicals in its business. Eventually, the chemicals they used contaminated the area’s groundwater. Other sources of these toxins included waste disposal sites and industrial accidents that contributed to the contamination of the water.

Health Conditions Related to the VOCs at Camp Lejeune

The 112th Congress passed the Honoring America’s Veterans and Caring for Camp Lejeune Families Act in 2012, and former President Obama signed it into law. This law allowed veterans and their family members who were exposed to the toxic water at Camp Lejeune to automatically qualify for certain types of medical benefits through the Veterans Administration.

Veterans and their eligible family members who lived on base for 30 or more days between 1953 and 1987 and later developed qualifying health conditions were supposed to be automatically eligible for benefits under this law.

The eligibility date for benefits differed based on when the veterans served at Camp Lejeune. Those who served at the base for at least 30 days between 1957 and 1987 were first entitled to benefits in Aug. 2012. Those who served or lived at the base between 1953 and 1956 were first eligible for benefits in Dec. 2014. To claim benefits, veterans and their family members had to present evidence that they had a qualifying condition that had manifested to a degree of 10% or more at any time after service.

However, many veterans and their family members who have developed one of the qualifying cancers or other conditions have been denied benefits from the VA despite their service at Camp Lejeune and exposure to the contaminated water during the relevant period.

An investigative report conducted by CBS News reviewed claims filed by veterans for benefits after their exposure to the contaminated water at Camp Lejeune. Despite having qualifying conditions, most of the veterans and family members who have filed claims have been denied or had their claims delayed for years. According to CBS, the rate of approval was initially quite low at only 25%.

The Camp Lejeune Justice Act of 2022 was introduced in the House of Representatives on Jan. 25, 2022. It is a bipartisan bill that is meant to ensure that all those who worked or lived at Camp Lejeune between 1953 and 1987 and who developed serious conditions related to the water contamination should be fairly compensated. Many of the claimants for benefits through the Veterans Administration under the 2012 law have had their claims improperly delayed or denied, which has resulted in additional harm.

The Camp Lejeune Justice Act has been included as a part of the Honoring our Promise to Address Comprehensive Toxins Act of 2021 (Honoring our PACT Act), which was passed by the House of Representatives on March 3, 2022. The bill will now go to the Senate, and if it is passed there, it will be sent to President Biden for his signature. If this bill is passed and enacted, people who lived, worked, or were exposed to contaminated water at Camp Lejeune in-utero will be permitted to file lawsuits in U.S. District Court to recover compensation. Since the bill has strong bipartisan support, it is expected to pass, which might provide relief to the thousands of people who have been affected by toxic exposure at Camp Lejeune.

Anyone who served, lived, or worked at Camp Lejeune between 1953 and 1987 and who developed a qualifying condition related to the contaminated water might be eligible to pursue compensation.

The compensation that might be recoverable in a Camp Lejeune cancer claim will depend on multiple factors, including the severity of your condition, your likelihood of recovering, and your other losses. Some of the types of damages that you might recover include the following:

Under the Camp Lejeune Justice Act, the government will not be allowed to assert immunity against a claim. If a claimant is awarded damages, the damages award will be offset by any benefits the claimant has received through the Veterans Administration’s disability and medical benefits, Medicare, or Medicaid used to treat exposure-related cancer. The act specifically states that punitive damages will not be recoverable.

Get Help From the Lovely Law Firm

If you developed breast, bladder, or kidney cancer or non-Hodgkins lymphoma after being stationed at Camp Lejeune or living or working on the base between 1953 and 1987, you might have legal rights to pursue compensation. If your claim for benefits has been denied by the VA, you should also consult an experienced attorney at The Lovely Law Firm in Myrtle Beach, South Carolina. We are currently accepting claims for evaluation. Call us today to schedule a free case evaluation at (843) 281-7452.

What a satisfied customer has to say about the Lovely Law Firm on Google.

The best law firm I have had the great pleasure working for me in the last 45+years. Very responsive each time I contacted them. I would highly recommend the Lovely Law firm. I will use them in the future and will recommend Lovely Law firm to all my friends too.

Eliza “Liza” Fletcher… The 34 year old Catholic School teacher who was kidnapped and killed while out for a morning run, has become the topic of many important discussions this month.

Join Female Attorneys Amy Lawrence and Sharde Crawford along with Host Rainee Romero as they discuss this tragedy, what we know so far, how it’s been handled, and the harsh reality females face.