If you served in a combat zone as a member of the U.S. Armed Forces after 2002, you were likely issued some yellow and black earplugs that were sold to the U.S. military by 3M and its predecessor, Aearo Technologies. The earplugs were marketed as being able to protect the ears against the concussive sounds of explosions by inserting the yellow end into the ear canal. The soldiers could also use the earplugs to reduce their exposure to ongoing loud noises by choosing to insert the black ends into their ears. Many soldiers who served in Afghanistan, Iraq, and other theaters were given these earplugs. If you are a veteran who wore these yellow and black earplugs while serving in the military after 2002 and have suffered from tinnitus or a hearing loss, you may have legal rights. 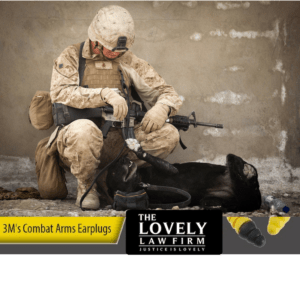 Aearo Technologies contracted with the U.S. military to provide a specialized type of earplugs called the Dual-Ended Combat Arms™ Earplugs, Version 2 (CAEv2). These earplugs are a type of selective attenuation earplugs. One end is yellow and the other end is black. Soldiers were told that they could insert the black end into their ears, which was the blocked position. This position was meant to work in the manner that normal earplugs do to reduce sound in general. Soldiers could instead insert the yellow end into their ears, which was the unblocked position.

Aearo Technologies claimed that this position allowed protected the soldiers’ ears from loud, sudden noises in explosions while also allowing them to hear commands from other soldiers on the field. In 2008, Aearo Technologies was acquired by 3M, meaning that 3M accepted all of the liabilities that Aearo had at that time.[1]

Problems with the 3M ear plugs

The 3M ear plugs contained a defect that made them ineffective in blocking noises from explosions. When soldiers inserted the unblocked position into their ears, the earplugs were supposed to conform to the sidewalls of their ear canals so that their ears were protected. However, the 3M ear plugs were too short. This meant that when they were inserted into some people’s ears, they did not function properly. The plugs could imperceptibly loosen, allowing harmful sounds to travel around the exterior of the plugs to the eardrum. This defect has led to a large number of military service members and veterans to suffer hearing losses.

Moldex-Metric Inc. filed a qui tam action against 3M in 2016 on behalf of the U.S. government. The case was filed under the False Claims Act and alleged that Aearo Technologies and 3M had known about the defects in the earplugs but did not disclose those issues to the military at the time of the contract. According to the complaint, Aearo Technologies was aware of the defect as early as 2000.[2]

Under the False Claims Act, people are able to file claims on behalf of the government against companies that engage in actions to defraud the government.[3] The plaintiffs are called relators and may recover a percentage of the money that the government is able to recover in the case.

The qui tam action against 3M ultimately reached a settlement with the U.S. government on July 26, 2018. The U.S. Department of Justice announced that 3M agreed to pay $9.1 million to settle the case against it.[4] In the settlement, 3M did not admit to liability.

If you are a veteran who served in a war zone since 2002, you likely were given the defective earplugs. Soldiers who served in the following locations might have been issued the 3M earplugs:

Because of the defects in the earplugs, many soldiers have suffered permanent hearing losses and constant ringing in their ears. If you have suffered a moderate to a severe loss of hearing after using the 3M earplugs in war zones since 2002, you may have the grounds to file a lawsuit.

Potential causes of action against 3M for tinnitus and hearing losses

The settlement in the qui tam action will not be paid to individual soldiers who have suffered permanent hearing losses. Instead, soldiers whose hearing losses or ringing in the ears were caused by exposure to noise in war zones while they were wearing the earplugs may file lawsuits against 3M. The available claims fall under an area of products liability called defective products.

Companies are liable for the injuries that people suffer when they use defective products that the companies sell in the manner in which they were intended but are injured by them. In order to prove that your injuries resulted from the defective earplugs, you will need to prove several legal elements by a preponderance of the evidence. This legal standard means that it is likelier than not to have occurred in the manner that you present. The elements of a defective earplugs claim are as follows:

In order to prove the elements of a defective earplugs case, you will need to gather evidence to support each of them. Your attorney might help you to secure your medical records, your disability rating from the Veteran’s Administration, your hearing tests, and other documentation that shows the link between your injury and your military service while you were wearing the 3M earplugs.

If you have suffered a permanent loss of hearing or chronic ringing in your ears after wearing the 3M earplugs in conflict zones between 2003 and 2016, you may be entitled to substantial compensation in a products liability lawsuit against 3M. The types of damages that you might be eligible to receive include compensatory damages, which include both economic and noneconomic damages. Economic damages include the following types:

Examples of noneconomic damages that you might be able to recover include the following:

In the case of 3M, it is possible that you might be able to recover punitive damages. These are damages that are meant to punish companies that have engaged in egregious conduct instead of to compensate you for your economic and noneconomic losses. Since Aearo Technologies and 3M were apparently aware of the defect in the earplugs but failed to disclose the information to the military, it is possible that punitive damages might be available to you from a lawsuit.

Pursuing a defective product claim against a designer or manufacturer can be a complex process. Many companies have teams of defense lawyers who are prepared to aggressively defend against liability claims. It is a good idea to secure legal representation from an attorney who can handle mass tort claims. To learn more about the rights that you might have, call us today to schedule a consultation. 843-839-4111