During open cardiac surgery or pulmonary surgery, a heater-cooler system may be used to keep the patient warm while simultaneously using cold water to cause the heart to temporarily stop beating. The Sorin Stockert 3T Heater-Cooler System is a device that has water tanks and circuits that allow it to perform these tasks. Unfortunately, the water tanks in the Stockert heater-cooler system may be contaminated with a type of mycobacteria called 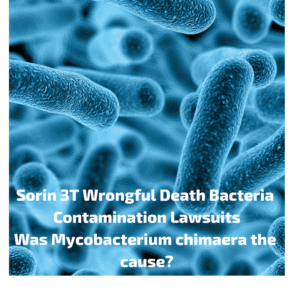 When the device is used during cardiac surgery, the bacteria may be released into the environment as an aerosol and may contaminate the surgical room as well as the cavity in the patient’s chest who is receiving the surgical procedure. Cardiac patients have developed severe infections from the contamination of the bacteria during their surgeries. The infections are severe enough that they may cause death even with antibiotics. Numerous lawsuits have been filed in the U.S. against LivaNova, the manufacturer of the Stockert device. If your loved one’s death from infection was caused by this bacteria after a previous open surgery, it is important for you to talk to an experienced attorney about filing a wrongful death lawsuit against the responsible entities.

Why lawsuits are being filed

In 2002, researchers in Germany found that M. chimaera can contaminate the water tanks of heater-cooler systems by growing inside of them. The contaminated water inside of the tanks can aerosolize in a vapor, releasing the bacteria through the system’s exhaust vent into the air of the surgery room. The bacteria can then contaminate the sterile surgical environment and can also infect the patient’s open chest cavity.

M. chimaera can cause non-tuberculous mycobacteria infections in people whose immune systems have been weakened, including those who are undergoing open surgeries. The contamination of the Stockert 3T heater-cooler system tanks doesn’t just result from a failure to clean them properly. In 2016, a study in Euro Surveillance found contamination in the tanks at the LivaNova manufacturing site, meaning that they were contaminated before they were shipped from the facility. As a result, people who have developed severe NTM infections and the families of those who have died from NTM infections have filed defective product lawsuits against LivaNova and other responsible parties.

Side effects from the heater-cooler system

M. chimaera normally does not cause non-tuberculous mycobacteria infections in healthy people and is found in the environment. However, when the 3T heater-cooler system causes the bacteria to aerosolize in a sterile surgical environment, it can cause severe infections in patients who are undergoing a cardiac or pulmonary surgery. In some cases, there may be a lengthy delay of several years between the time when patients are exposed to M. chimaera during surgery and when their infections develop.

A nontuberculous mycobacteria infection may cause the following side effects and complications:

If you have had an open surgery to the organs in your chest and experience any of these symptoms, you should ask your doctor to perform diagnostic tests to check if you have a nontuberculous mycobacteria infection. The infection cannot be spread from one person to another. Treatment normally involves taking several prescriptions of antibiotics for long time periods.

The Sorin Group, a wholly owned subsidiary of LivaNova, recalled the 3T heater-cooler device on June 15, 2015. The Food and Drug Administration sent a warning letter to LivaNova, threatening to ban the device for not conforming to health and safety standards and for the company’s manufacturing process for failing to conform to manufacturing standards.

The Centers for Disease Control and Prevention reports that an average of 250,000 bypass surgeries are performed in the U.S. each year with heater-cooler systems, and an estimated 60 percent of the procedures have been performed with the Stockert 3T system. The CDC estimated the risk of contracting the infections to range from one in 100 to one in 1,000. Even with treatment, the nontuberculous mycobacteria infections have a mortality rate of 50 percent for people who contract them.

Legal claims in the lawsuits

The lawsuits against LivaNova are based on several different products liability claims. The lawsuits allege that LivaNova sold the 3T systems to doctors and hospitals despite the fact that it knew or should have known that the tanks were infected with mycobacteria. The German study that was referenced earlier demonstrates that researchers found contamination of the tanks with the M. chimaera as early as 2002.

The lawsuits further allege that after LivaNova was aware of the contamination issue, it failed to take the 3T devices off of the market. Finally, the lawsuits allege that LivaNova failed to warn doctors and hospitals that had purchased the devices about the contamination problem and the need for them to remove the devices from their medical facilities. As of Oct. 15, 2018, there were 84 cases pending in federal court for potential multidistrict litigation.

In addition to LivaNova, the owner of York Hospital in Pennsylvania has also been named as a defendant to multiple lawsuits. The hospital was the site of 12 NTM infections. It sent warnings to more than 1,300 people who had received open surgeries between 2011 and 2015, removed the devices, and changed its inspection procedures. Despite its efforts, WellSpan Health has been named as a co-defendant of LivaNova in six lawsuits.

If your loved one’s death from infection was caused by non-tuberculous mycobacteria following cardiothoracic surgery, you may be able to recover the following types of damages:

Punitive damages are very rare and are designed to punish the defendants in order to deter them from engaging in similar conduct in the future. If you are able to prove that LivaNova knew about the contamination in its tanks and still released them to the public, resulting in your loved one’s death, it is possible that you might be able to recover punitive damages in addition to the compensatory damages.

The issues involved in defective medical device lawsuits can be complex. It is important for you to find a lawyer who is experienced in handling mass tort matters. An attorney may understand how to conduct thorough investigations to secure the evidence that you might need to prove your claim.

Multinational companies such as LivaNova have teams of defense lawyers who mount aggressive defenses to tort claims. Getting legal representation is important so that you have someone who might anticipate the types of arguments that the defense might raise and effectively counter them for you. To learn more about your potential claim and to obtain a confidential case evaluation, contact us today to schedule a consultation.