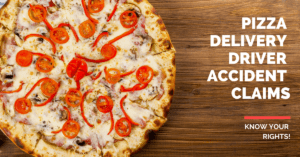 Pizza is one of those entrees that most people love, and ordering pizza for delivery is popular. Whether you prefer Pizza Hut, Dominoes, Papa Johns, or Hungry Howies, you simply have to make a quick phone call or place your order online, and your pizza will arrive at your door in a short period of time.

Unfortunately, pizza delivery drivers are more likely to cause accidents. These wrecks cause pizza delivery driver accident claims. If you are seriously injured in a collision with a pizza delivery driver or another food service delivery driver, determining who might be liable can be a complicated issue. When collisions are caused by pizza delivery drivers in Myrtle Beach, the drivers’ insurance companies will often refuse to pay. Most insurance policies include exclusions for when people are driving as a part of their jobs. However, this does not mean that you will not be able to recover damages. Instead, there are several other potential sources of recovery that your attorney might identify and name in your lawsuit so that you might maximize the amount of compensation that you ultimately recover.

Pizza delivery drivers have a higher risk of causing collisions for several reasons. Many food delivery drivers for companies like Pizza Hut, Dominoes, Hungry Howies, or Papa Johns are young, inexperienced drivers. Delivery drivers are often pressured by their companies to make their deliveries quickly. This pressure might make them engage in negligent driving behaviors such as speeding, reckless driving, driving too fast for conditions, and failing to obey traffic control devices. Finally, food delivery drivers of all types, including those who drive for Uber Eats and Grubhub in addition to pizza drivers, spend much more time behind the wheel of their vehicles. When people spend more time driving, they are much likelier to be involved in accidents.

There are multiple parties that might be liable in a wreck that was caused by a pizza delivery driver. While the driver may have a personal insurance policy, the company is unlikely to pay. However, several other parties may be potential sources of recovery.

Companies that employ the drivers may be liable to pay damages when the negligence of their employees cause accidents and injuries. Under a legal principle called respondeat superior, employers are liable for the negligent actions of their employees when the employees are acting within the scope and course of their jobs. Restaurants may carry commercial general liability coverage that lists all of their drivers. Commercial policies often have much higher policy limits than personal insurance policies.

Delivery services or restaurants that classify their delivery drivers as independent contractors may not be vicariously liable for collisions that the drivers cause. However, some employers misclassify workers as independent contractors when they instead should be classified as employees. Independent contractors should have control over the manner in which they operate their businesses under their contracts. If the restaurant controls when they work, how they work, and other aspects of the drivers’ jobs, the drivers may be misclassified. Showing that the delivery drivers should actually be considered to be employees may allow you to hold the restaurants liable for your losses.

If you have an uninsured and underinsured insurance policy, you may be able to recover compensation from your own company. UM/UIM insurance is an additional policy that compensates you when you are involved in a collision with a driver who has no insurance or insufficient insurance. Having this type of coverage is a good idea because a delivery driver who only has a personal insurance policy may not have coverage to compensate you for your losses.

Grub Hub does not carry liability insurance for its drivers. Instead, people who sign up to drive for the app must provide their own insurance coverage. This means that you will have to go after the driver instead of the app. However, it is still possible for you to recover from the company if the company was negligent in hiring a driver. For example, if it contracted with a driver who had an extensive negative driving record, you might be able to recover damages from the company.

Uber Eats carries liability insurance at three tiers for its drivers. If you were injured in an accident while a driver was delivering a pizza or other food, you may be able to recover from Uber’s $1 million liability policy.

There are several steps that you should take when you are injured in a crash with a delivery driver. If you can, take pictures of the damage to both vehicles, or ask a friend to take them for you. Get the driver’s information, including his or her name, address, phone number, and insurance. Ask the driver for the contact information of his or her employer. You should also try to get the contact information of any witnesses to the accident and take pictures of relevant information from the scene such as speed limit signs, skid marks, traffic control devices, and the relative positions of both vehicles.

Make certain to seek medical attention as soon as possible after your accident. If you allow time to pass, your injuries can worsen, and your claim can be more difficult to prove. Finally, you should talk to a personal injury attorney in Myrtle Beach. An attorney may be familiar with the types of defenses that may be raised by the various defendants. When large companies are involved, they may have teams of defense lawyers who are prepared to aggressively litigate against injury claims. Experienced attorneys may know how to build strong cases that prove liability, helping you to recover the compensation amount to which you should be entitled. To learn about your potential claim, contact us today to schedule your consultation.