Not Sure Where to Turn? We can Help.

Many people suffer from rheumatoid arthritis, a debilitating and painful condition that impacts the joints. Doctors might prescribe Janus kinase inhibitors (JAK inhibitors) to alleviate swelling and pain in the joints. JAK inhibitors help by reducing the body’s overactive immune system response to reduce inflammation in the joints. Xeljanz is a popular JAK inhibitor manufactured by Pfizer that is frequently prescribed to people who suffer from rheumatoid arthritis. However, this drug has been the subject of mass tort claims against Pfizer because of the serious side effects it can cause. The lawsuits allege that Xeljanz has design defects and that Pfizer failed to adequately warn people about its dangers. 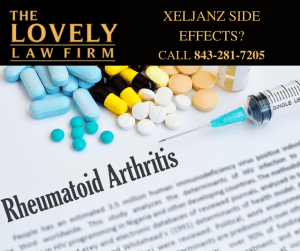 Xeljanz is the brand name for the generic drug tofacitinib and is manufactured by Pfizer. It is an oral medication and has been approved by the federal Food and Drug Administration (FDA) for the treatment of rheumatoid arthritis, ulcerative colitis, and psoriatic arthritis. It is a JAK inhibitor that inhibits JAK enzymes. JAK enzymes transcribe DNA and trigger new cellular growth, and overgrowth due to an overactive immune system can lead to inflammation in the joints. By inhibiting JAK enzymes, Xejanz helps to reduce swelling and joint pain.

Xeljanz is available in doses of five milligrams per pill. It also is available in an extended-release form in 11 mg doses so that the drug can be released throughout the day. People with rheumatoid or psoriatic arthritis are normally prescribed one 5 mg tablet taken twice per day. Those who have liver or kidney problems are normally only prescribed one 5 mg tablet per day.

Side Effects of Xeljanz

At high doses, Xeljanz has been associated with the following serious side effects:

Other potential side effects of Xeljanz include the following:

The lawsuits against Pfizer include allegations that the drug manufacturer failed to warn people about these serious side effects and that the drug was defectively designed.

The Lovely Law Firm is reviewing product liability cases to represent plaintiffs in the mass tort litigation against Pfizer. Currently, these claims are progressing individually but will likely be consolidated into multidistrict litigation (MDL) in the future.

Link Between Cancer and Xeljanz

A link has been found between Xeljanz and the development of malignant cancer. The types of cancer that have been linked to Xeljanz include the following:

Two studies analyzed the results of multiple Xeljanz clinical trials of thousands of patients and found that people who take this drug have an increased risk of developing cancer. The FDA issued a communication on Feb. 4, 2021, in which it announced that Xeljanz use is linked to a higher risk of cancer, heart attacks, and other heart problems.

A link has also been found between Xeljanz and blood clots, including in the lungs. These clots can result in pulmonary embolisms and potential death. A post-marketing clinical trial that began in 2014 is still ongoing. Pfizer announced that people who take 10 mg doses of Xeljanz twice per day are five times likelier to suffer pulmonary embolisms than people taking tumor necrosis factor inhibitors or TNF blockers. In the comparison between Xeljanz and TNF blockers, 45 of those who took Xeljanz 10 mg doses twice per day died versus 25 of those who took TNF blockers.

Xeljanz first received FDA approval in the U.S. in 2012. The FDA added a black box warning to Xeljanz in July 2019. This warning states that rheumatoid arthritis patients taking Xeljanz 10 mg twice per day who are 50 or older and who have a cardiovascular disease risk factor have a heightened risk of blood clots and sudden cardiac arrest. Those with ulcerative colitis also have a higher risk of blood clots and death. In Sept. 2021, the FDA updated the black box warning to include cancer and cardiac risks.

Many lawsuits have been filed by patients and the families of people who have died because of the serious side effects caused by taking Xeljanz. These lawsuits include two main legal grounds, including defective design and failure to warn.

The defective design claim is based on Pfizer’s allegedly faulty design of Xeljanz, meaning that a mistake in the chemical makeup of the drug causes victims to develop dangerous conditions. Plaintiffs argue that Pfizer should be held liable for its negligence in the design and production of Xeljanz and for all foreseeable resulting injuries.

Many Xeljanz legal actions also include claims that Pfizer’s failure to provide adequate warnings to patients and doctors about the serious risks involved with this drug. Patients and physicians rely on drug warnings to make health care decisions. When a drug company like Pfizer fails to include adequate warnings about the risks of the drugs it produces, it prioritizes profits over health.

A black box warning was not added to Xeljanz until 2019 when the FDA ordered it to be added. With the current warning label, patients and doctors might decide against taking or prescribing this medication because of the dangerous side effects it can cause.

Other potential causes of action that might be brought include the following:

Compensation in a Xeljanz Lawsuit

The compensation that might be available in a successful Xeljanz lawsuit will depend on the individual facts and circumstances of a particular case. Some of the types of compensatory damages that might be recoverable include the following:

In South Carolina, the damages recoverable in a wrongful death lawsuit include those that the victim would have been able to claim if he or she had lived through a personal injury lawsuit. A wrongful death lawsuit against Pfizer could also recover other costs, including funeral and burial expenses, lost inheritance rights, and loss of the financial contributions the victim might have made over his or her life if he or she had not died.

Currently, the Xeljanz lawsuits are proceeding individually through the judicial system. However, it is likely that the individual lawsuits will be consolidated into multidistrict litigation (MDL) or a class-action lawsuit because of the thousands of potential victims. MDLs and class-action lawsuits are used by the courts to consolidate claims that are similar against a single defendant. However, MDLs and class actions have important distinctions.

Class-action lawsuits combine lawsuits for the entire duration as they move through the courts. MDLs consolidate lawsuits for pretrial procedures and discovery, helping to streamline the cases and cut costs by allowing all plaintiffs to share discovery through single disclosures.

Get Help From The Lovely Law Firm

The mass tort attorneys at The Lovely Law Firm in Myrtle Beach, South Carolina are currently reviewing cases involving people who have developed serious medical conditions after taking Xeljanz. If you or your loved one developed lung cancer, blood clots, or major cardiac problems, or your loved one died after taking Xeljanz, you might be entitled to recover compensation through a lawsuit against Pfizer. To learn more, contact us today for a free consultation by calling (843) 281-7452.

Lovely Law Firm is a great firm with excellent lawyers and I highly recommend them and would definitely use them again if the need ever arose. Thank you Lovely Law Firm for your hard work.