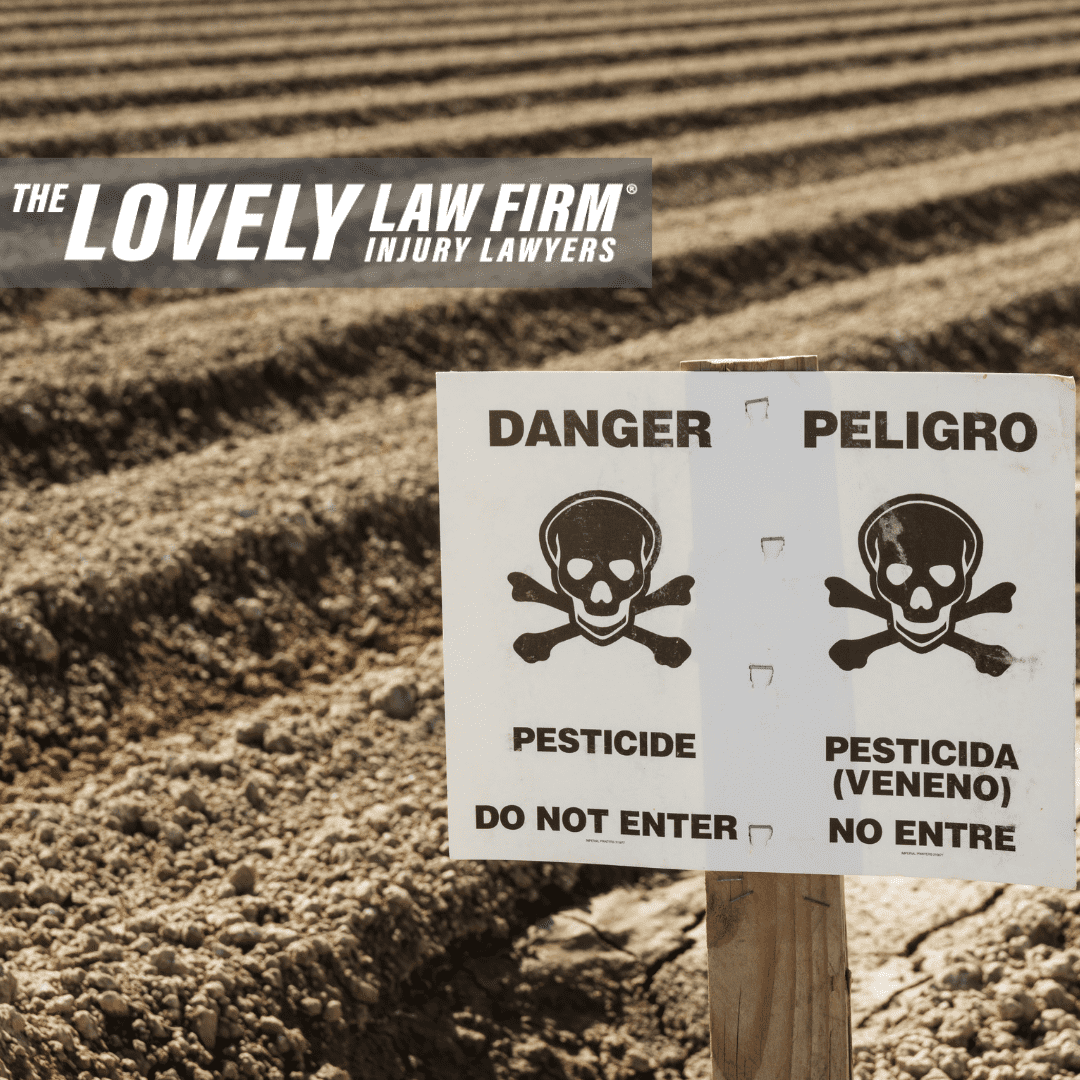 Paraquat weedkiller is devasting applicators who were exposed and later develop Parkinson’s Disease. The litigation is progressing rapidly and our legal team is here to help you if you have been diagnosed with Parkinson’s Disease. This chemical bioaccumulates in the body and is bioactive causing oxidative stress. Studies show that this chain reaction in your body leads to later Parkinson’s Disease. Paraquat is so toxic, 3 drops can kill a human being. In fact, persons living within 1600 feet of an application of Paraquat could be in danger of being exposed. Exposure Experts will need to be retained to analyze 1 square mile around application sites. This will allow us to prove the types of farms and the people living around it that were exposed to Paraquat. Unlike the Roundup litigation, Paraquat use required a licensed applicator to use the chemical. The company knows when and where this was applied. Studies have shown that only 8% of Parkinson’s disease is genetic with the rest being environmental exposure. The Litigation is focusing on several angles but among them are warning omissions by Syngenta on the Paraquat label. The label does not warn about:

Morbidity and Toxicity of Paraquat was clear in 1973. In 1974, Irish doctors reported how bad this chemical is. In fact, China, Switzerland, and the UK have banned this chemical. Further studies throughout the years have also shown how bad this chemical is to humans. Syngenta knew about these studies. The litigation is progressing at a rapid pace and more and more facts will begin to be exposed. The Lovely Law Firm can review your case to see if you may have a claim against Syngenta for Paraquat exposure. Check this page often for lawsuit updates.

Many sick people may not have a final Parkinson’s Disease diagnosis yet. Look for these symptoms:

Further, you may be prescribed the following medicines. See your neurologist for a Parkinson’s Diagnosis from Paraquat exposure

Paraquat weedkiller is commonly used by field workers. Farmers and agricultural workers who develop Parkinson’s disease might not realize that their conditions were caused by exposure to paraquat, a chemical contained in a number of industrial weedkiller brands. Many people who suffer symptoms think that their symptoms were caused by exposure to Roundup, another herbicide that has been linked to a variety of different types of cancer. These victims might subsequently learn that their symptoms are not related to Roundup exposure but instead related to paraquat-containing herbicides used in agricultural applications.

If you were exposed to an herbicide containing this substance, a lawsuit might be an option if you suffered a variety of different complications, including Parkinson’s disease. This chemical is widely used for grass and weed control and is commonly used throughout the U.S. and the world. We are currently investigating cases involving the following people diagnosed with Parkinson’s Disease:

If you are in one of the above groups and are experiencing symptoms, go to your doctor now or get an appointment with a neurologist. If Parkinson’s disease is in your family history who may not have a Paraquat claim as the disease can be genetic.

In the Southeast, Paraquat was used on Soy Beans, Corn, Cotton and Tobacco crops. These crops are commonly grown in North and South Carolina. It is a vibrant blue in color with a distinct smell from the odor additive.

Studies have shown a link between substances in paraquat-containing herbicides and the development of serious health conditions, including Parkinson’s. This disease is a common neurological disorder that is progressive and can be fatal. If you developed this condition because of your exposure to weedkillers, you might be entitled to pursue compensation through a product liability claim against the manufacturer. The attorneys at The Lovely Law Firm in Myrtle Beach, South Carolina are currently accepting claims for evaluation and can help you understand your potential rights and legal options. Contact us today for a free, no-obligation consultation with an experienced injury attorney about filing a lawsuit.

Ortho-Paraquat or N, N′-dimethyl-4,4′-bipyridinium dichloride is a toxic chemical used to control grass and weeds and acts as a defoliant on agricultural crops before harvest. The Environmental Protection Agency reports that this substance is among the most commonly used herbicides in the U.S. for agricultural purposes.

This chemical was commercially produced beginning in 1961 under the brand name of Gramoxone. Today, it is only available to commercially licensed users and is listed as a restricted-use chemical. In the U.S., this substance comes in a blue-dyed liquid to prevent it from being confused with consumable drinks. If swallowed, it is highly toxic and can cause death.

Paraquat-containing weedkillers are manufactured under a number of different brand names. The most common brand is Gramoxone, which is manufactured by Syngenta, a global company based in Switzerland. Several other industrial herbicides also contain this chemical. Some of the other brands include Ortho-Paraquat, Helmquat, Parazone, Quick-Quat, Para-Shot, and Firestorm.

How exposure can occur

The U.S. Centers for Disease Control and Prevention list multiple routes of exposure to paraquat-containing herbicides, including the following:

When people ingest a paraquat-containing weedkiller like Parazone, Quick-Quat, Firestorm, or Helmquat, they might experience immediate swelling and pain in their throats and mouths. These symptoms may be followed by gastrointestinal issues, including abdominal pain, bloody diarrhea, nausea, and vomiting. The gastrointestinal symptoms that people experience may cause electrolyte imbalances, low blood pressure, and severe dehydration.

People who ingest small amounts of paraquat-containing herbicides might develop symptoms within a few days to weeks. These can include liver failure, kidney failure, lung scarring, and heart failure.

Other symptoms of ingesting paraquat-containing herbicides might occur over a few hours or days and include the following:

Parkinson’s is a degenerative neurological disorder. The brain cells in people with Parkinson’s gradually die and cause numerous symptoms, including muscular rigidity, uncontrolled movements, tremors, extremely slowed movement, and motor control problems. People who suffer from this condition may also have trouble speaking and swallowing. Other symptoms can also occur.

Parkinson’s can be caused by genetic or environmental factors. Researchers at the National Institutes of Health found a strong link between the development of the disorder and exposure to a group of herbicides, including paraquat-containing weedkillers. The research indicated that exposure to this herbicide could cause neurological effects that could contribute to people developing Parkinson’s.

A study that was published in the Journal of Epidemiology in 2009 found that exposures to paraquat-containing herbicides within 1,650 feet of homes were linked to a higher risk of developing Parkinson’s by 75%.

Epidemiological studies have continued to find possible links between exposure to paraquat-containing herbicides and Parkinson’s. The adverse health effects of this substance continue to be investigated on people who have had long-term exposure.

The manufacturers of paraquat-containing herbicides might have known about the link between the chemical and Parkinson’s for years but never disclosed the risks to the public. This failure to adequately warn the public means that people who have developed Parkinson’s following exposure to paraquat-containing herbicides might be able to hold the manufacturers liable for their losses. The manufacturers’ potential liability is based on the fact that they have sold dangerous products without providing adequate warnings. Farmers and others who have used or been exposed to this substance and were subsequently diagnosed with Parkinson’s might be entitled to substantial compensation.

Over the next few years, many additional lawsuits will likely be filed. Eventually, multi-district litigation or MDL might be created. If an MDL is created for paraquat-containing herbicide claims, it could result in a global settlement through which the plaintiffs might receive settlements.

Herbicide and chemical manufacturers have a duty of care to consumers to adequately warn them of any risks involved with using their products. They also have a duty to provide products that are reasonably safe and free from defects. If a product carries a risk of harm, warnings about the risks must be included on the product’s warning label.

Manufacturers that fail to meet their obligations could be held liable for the injuries consumers suffer as a result of being exposed to the herbicides sold by the companies. An attorney for people who have been injured by paraquat exposure might help the victims recover monetary damages for the following types of losses:

If the manufacturers are found to have willfully acted to conceal the information from the public, punitive damages might also be available.

Get help from a product liability lawyer

If you have developed Parkinson’s after being exposed to paraquat, you should contact The Lovely Law Firm to learn about your potential rights. We offer free consultations and can analyze your case and help you to understand the legal merits of your potential claim. You are under no obligation to retain us, and we maintain the confidentiality of all of the information we receive.

South Carolina law limits how much time you have to pursue a claim against a manufacturer for your injuries. If you believe you might have a case, contact us today at (843) 281-7452 to schedule an appointment.