Have You Had an Exactech Knee Replacement?

Recently, Exactech, a major maker of many knee replacement implants in the U.S., announced a recall of all devices manufactured after 2004 because of the degradation of a polyethylene component caused by defective packing. 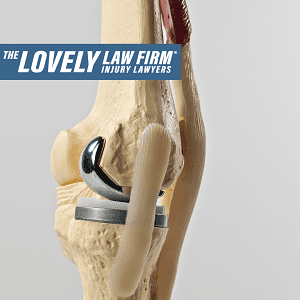 The defect has resulted in the premature failure of many knee implants manufactured by the company and has caused many patients to undergo corrective surgery.

If you were forced to undergo additional knee surgeries because of an Exactech knee implant failure, you might be entitled to pursue compensation through a lawsuit against the company.

The attorneys at The Lovely Law Firm are currently accepting cases involving Exactech knee implant failures from victims who had recalled implants that failed that had revision surgery or will be forced to undergo it.

Exactech Inc. was founded in 1985 and is a global medical device manufacturer with headquarters in Gainesville, Florida. The company focuses on designing and manufacturing joint replacement surgical implants and has more than 900 employees globally.

These implants are used in total knee arthroplasty to replace patients’ knees and relieve severe pain caused by arthritis as well as to correct knee deformities caused by trauma to the knees.

The following knee replacement implant systems implanted after 2004 are affected by the recall:

Exactech issued the recall after discovering a defect in the packaging of its systems caused the polyethylene component to start oxidizing before implantation. The oxidation causes significant deterioration of the polyethylene insert, which impacts its ability to properly function within the knee replacement implant system.

The degradation of the polyethylene insert causes excessive wear, friction, and premature failure of the company’s knee replacement systems.

The defective packaging included materials that did not include second layers in the vacuum-sealed packaging to provide additional protection from oxygen seeping into the replacement devices. The lack of the second layer caused the degradation of the insert components.

Patients who have had these devices surgically implanted and experience device failure can experience severe pain and a loss of mobility in their affected knees. The patients will eventually need to undergo corrective knee replacement revision surgery to remove and replace the devices.

What Patients and Surgeons Should Do

In Feb. 2022, Exactech issued a letter to all affected patients and doctors about its recall. Surgeons and hospitals were told to stop using Exatech knee replacement implants immediately and to return their inventories of recalled knee implants to the company to receive replacements.

Patients who have already had the recalled replacements implanted have been told to speak with their doctors. Their doctors have been advised to closely monitor all patients with these implants to watch for signs of device failures. The company also issued a template letter for doctors to use for their patients that explains the recall.

If you have a recalled Exactech knee replacement implanted, some of the symptoms you might experience if your device has failed because of the defect include the following:

If our doctor suspects that your implant has failed, they will take x-rays to evaluate your implant and determine whether you need to undergo revision surgery.

Exactech’s History of Issues With Its Knee Replacement Implants

Exactech’s knee replacement implants have a lengthy history of high rates of failure and other issues.

The company used the abbreviated clearance process with the U.S. Food and Drug Administration (FDA), which allowed it to avoid the FDA’s full review process. Exactech has long known that its OPTETRAK knee replacement systems have substantially higher rates of failure than other devices.

Reports within the Manufacturer and User Facility Device Experience (MAUDE) database demonstrate the high failure rates of the Exactech knee replacement implants as compared to those manufactured by other companies. This demonstrates that Exactech was aware of the problems with its devices years ago.

Since MAUDE sets a maximum display limit of 500 for complaints, it is impossible to review all of them because of the large number of complaints that have been submitted about Exactech’s knee replacement implant devices.

Previous product liability lawsuits filed against Exactech focused on the finned design the devices used to have and Exactech’s failure to warn consumers about the risks. However, they did not understand the packaging defect since it was only recently reported.

Even though the company phased out its finned design, the high failure rates of their devices continued, resulting in the discovery of the packaging defect that prompted the company to issue the recall.

Exactech is legally obligated to ensure its products are safe and free from defects when they are used as intended. In the company’s recall notice, the company admits that its knee replacement implants contain defects, so victims might be able to hold Exactech liable for their injuries and losses that have resulted.

If you have had knee replacement surgery since 2004 and received an Exactech knee replacement implant, you might have grounds to file a product liability lawsuit against the company if your device failed and you were forced to undergo corrective surgery.

If you are successful, you would be entitled to recover damages for your related medical expenses, your corrective surgery expenses, rehabilitation costs, wage losses, and the physical pain and suffering you experienced as a result of your knee implant failure.

Since 150,000 patients with knee replacement implants in the U.S. have received the defective Exactech devices, the number of lawsuits is expected to substantially increase. The courts will likely streamline the lawsuits into multi-district litigation so that plaintiffs can share evidence from discovery. Multi-district litigation (MDL) is used when many plaintiffs have been harmed by the same action by a company.

Recently, a case, Burke v. Exactech Inc., 1:22-cv-020806 (S.D. NY), was filed in U.S. District Court in New York against Exactech following its recall. The plaintiff had a defective Exactech knee replacement system implanted in 2013 in his left knee and a second one implanted in his right knee in 2015. Because of the failure of the defective devices, the plaintiff had to undergo revision surgery in 2019.

The Burke complaint was filed on March 14, 2022, and cites the company’s recall based on its defective packaging. It argues that the company knew about the defect but failed to warn patients and surgeons. While Burke alleges 10 separate causes of action, the primary theory is based on strict liability. He is pursuing compensatory and punitive damages.

The amount of compensation you might receive will depend on the extent of your injuries and losses as well as other factors.

Get Help From The Lovely Law Firm

The experienced attorneys at The Lovely Law Firm are currently accepting cases for review and can help you understand your legal rights. Call us today at (843) 281-7452 for a free case evaluation.

What A Happy Client Says on Google

My experience with Lovely Law Firm was excellent. They took care of everything. No follow-ups were required. They kept me informed throughout the complete process. I would highly recommend them to anyone that wants a hassle-free experience. I would definitely use them again, but I hope I won’t need to. Five stars for sure! Thank you for making my life easier.
Susan P.
⭐⭐⭐⭐⭐