Are you hurt?
Facing Criminal Charges?
Want to Chat?

Walking along a city street should be a safe atmosphere for pedestrians; however, in many cases, negligent drivers compromise the well being of pedestrians and cyclists. Despite cross walks and other traffic laws created to protect pedestrians, each year approximately 64,000 people are struck by cars while walking and, 5,000 are killed.  There is a current trend in city management to build “pedestrian friendly” roads with ample lighting and sidewalks.  Unfortunately many of our area roads are not necessarily safe for the pedestrian.

More than 50% of accidents involving pedestrians and cars are fatal for the walker. If not lethal, it is likely that they have incurred serious injuries that could permanently alter their lifestyle. If you or someone you love has been injured by a negligent driver, you may be eligible to receive compensation for your medical expenses, pain and suffering, lost wages, or wrongful death. 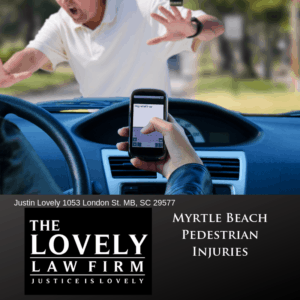 The Lovely Law firm is dedicated to helping people like you claim the compensation you deserve.

To find more information on claiming compensation for your pedestrian accident or to find out if you can claim you should contact us today.

Pedestrian Accidents
Many people in South Carolina choose to walk for exercise or simply as a means of getting where they need to go. Choosing to walk in Myrtle Beach is healthy and is also good for the environment. However, pedestrians have a much greater risk of suffering serious injuries or of being killed when they are struck by vehicles since they have nothing to protect them from their surroundings and from the physical forces that are released in collisions. When people are struck and injured in accidents that are caused by the motorists, the victims and the families of victims who are killed have legal rights to pursue compensation by filing personal injury lawsuits to hold the motorists liable. An experienced attorney may investigate the facts and circumstances of what happened in an effort to uncover all of the potential recovery sources so that their clients might be able to maximize their recovery amounts.

Pedestrians are much likelier to suffer severe injuries or to be killed when they are struck by cars or other vehicles. According to the U.S. Centers for Disease Control and Prevention, pedestrians are one-and-one-half times likelier to be killed in car accidents during each trip that they take than are people who are occupying motor vehicles. In 2016, the CDC reports that 5,987 pedestrians were killed in traffic accidents. In 2015, 129,000 pedestrians sought treatment for non-fatal injuries in emergency departments in hospitals around the nation.

These statistics demonstrate the dangers to pedestrians of being injured or killed in accidents. They also illustrate that both the pedestrians and drivers may be at fault in causing their accidents, making it important for both to take steps to prevent pedestrian collisions from occurring.

Under the laws of South Carolina, both pedestrians and motorists have certain duties when they are traveling on the roadways. Drivers in the state owe duties of care to pedestrians to do the following:

In addition to these pedestrian-specific duties that are owed by motorists, the motorists must also follow the traffic laws. This means that they should not speed, ignore traffic control devices, engage in distracted driving practices, drive while they are under the influence of alcohol or drugs, or drive while they are drowsy. All of these types of driver behaviors can cause accidents, including pedestrian crashes.

Pedestrians have the following responsibilities:

There are a number of common causes of accidents involving pedestrians in Myrtle Beach, including the following:

Both pedestrians and drivers need to understand the causes of accidents and remain alert so that they can avoid them.

What occurs after pedestrian accidents?

In some cases, the motorist’s insurance policy will not be sufficient to cover all of the losses that the pedestrian has suffered. Pedestrians who are injured in accidents may suffer catastrophic injuries and require ongoing medical care that can quickly exhaust the policy limits. If the pedestrian has underinsured motorist coverage, he or she can submit a claim to his or her own insurance company in addition to filing a claim with the at-fault driver’s policy. Underinsured motorist coverage will pay the difference between the policy limits of the at-fault driver’s policy up to the policy limits of the UIM coverage.

After the accident, the insurance company will try to contact the injured pedestrian. The insurance representative may ask the injured victim to give a recorded statement or to sign an authorization for the release of his or her medical records. Injured people should never agree to give recorded statements or to sign authorizations. They also should not agree to accept an offer of settlement without first talking to an experienced injury lawyer. An attorney can handle the negotiations for the victim on his or her behalf and might be better-positioned to properly value the claim.

How a personal injury attorney might be able to help

Personal injury lawyers in South Carolina who are experienced with handling pedestrian accident claims may have a thorough understanding of the defense strategies that are commonly used by insurance companies. This can help them to anticipate and counter the arguments that might be raised by the defendants. Lawyers may also work with accident reconstruction experts, investigators, and medical experts to build strong cases that clearly show the liability of the motorist and the extent of the pedestrians’ injuries. Even if a case does not go to trial, preparing it thoroughly may help the attorney to secure a fair settlement that pays for all of the victim’s economic and noneconomic losses. If the insurance company fails to make a fair offer of settlement, the attorney may file a formal lawsuit and litigate for his or her client through the court process and trial. Contact a personal injury lawyer at the Lovely Law Firm today for a free consultation.

Firms past performance and experience does not guarantee future results. No fee if no recovery. Injury cases are handled on a contingency fee calculated before expenses from gross recovery. Costs are paid by the client regardless of outcome.